Yesterday I visited ‘Mind The Book‘, an alternative book fair. There was a special small fair for bibliophile editions, with some extremely beautiful books. Also limited, handmade editions like ‘The Cover Mountain’ could be found, though every book was completely different. I attended a discussion between art critic Anna Tilroe and writer Joost Zwagerman. It was a rather depressive talk about the art world, especially since Tilroe made some sort of analysis on how the multi-billionnaires of, let’s say, Russia, and their market/capitalistic attitude towards art is starting to influence the rest of the artworld. I wish I knew where those multi-billionnaires were at, actually. Ha. But I do agree with Tilroe that institutions like public museums should focus on showing another type of art – and art-perception.

Also at ‘Mind The Book’, one of my heroes, semiologist and writer Umberto Eco gave a lecture. He explained how he constructs his novels. ‘Constructing’ is exactly the right word, since he concentrates on historical events to surround his characters with. This sometimes complicates things, especially regarding the time-line of events he wants the main character to participate in. He, for instance, found himself in ‘Baudolino’ in front of a time-gap of almost forty years that he somehow needed to cross. Not an easy task. Eco also often draws his characters or the layout of specific locations in his novels.

After the lecture there was a possibility to get books signed. I took four Eco novels; ‘The Name of the Rose’, ‘The Cemetary of Prague’, ‘Baudolino’ and ‘Foucault’s Pendulum’, which I got for Sinterklaas in december of 1999 and which I’ve read five times. Unfortunately I completely underestimated the hype around Eco. There were about 600 people in the venue. Because of this there were rules layed out regarding the book-signing; only one book per person and Eco would sign no names, just his autograph.

In the hallway there was a bookstand selling his last book, ‘The Cemetary of Prague’, which a lot of people decided to buy only after the lecture. I was in doubt to which book I should have Eco sign. ‘The Name of the Rose’ was the first one to drop out of this race, because I think it’s his least interesting novel (at least from the four I brought with me). I’m almost halfway ‘The Cemetary of Prague’, so I’m not sure yet if it would be worth to have had it signed. It was between ‘Baudolino’ and ‘Foucault’s pendulum’. Since I first read ‘Foucault’s Pendulum’ – which was before 1999, I think I first took it from the library – it became one of my favourite books of all times. It stayed that way for a long time, even after I read ‘Baudolino’ for the first time. But, I think one or two years ago, I re-read ‘Baudolino’ and suddenly I was in doubt of which one of the two I thought was better. I was inclined to choose for ‘Baudolino’.

When I opened my bag to grab it, I noticed that ‘Baudolino’ still looked rather new – I only read it twice. It had no life in it yet. I immediately decided to have ‘Foucault’s Pendulum’ signed, since it was so much longer a favorite and I even had to wrap it in plastic to keep the cover from more damage.

Eco signed it, I even got him to write my name (everything in split seconds, unfortunately, due to the long line of people who just bought his book and will probably never read it because, well, Eco is not always an easy read – the nickname for ‘Foucault’s Pendulum’ is ‘the least read best-seller’). I noticed the first page almost fell out. That’s what happens when you really love a book. I hope Eco didn’t mind. 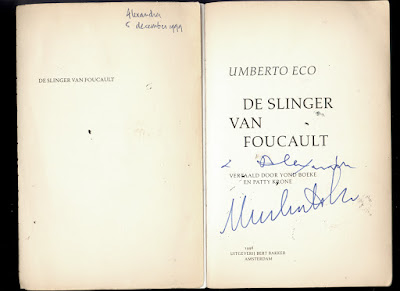