Hm. As far as the Phd proposal regarding my work and the archaeological/antropological research that goes with it, my admission to the specific PhDArts programme in The Hague (the only official phd-in-arts trajectory in the Netherlands) has been declined after I got through to the second round. I’ll nevertheless keep in touch with some excellent contacts I made during the process, amongst which prof. dr. Raymond Corbey of the faculty of archaeology in Leiden and Anne-Mie van Kerckhoven. Also, it still might be an option to try to get into a Phd-programme in Belgium, though I seem to have another interpretation about the way research and art can be intertwined than people from the art theory do.

I’ve decided to put two of the texts that accompanied my dossier on this blog. They’re all about the context I’m working in. They might be interesting. In this post Text I, in the next post you’ll find Text II.

TEXT I
Alexandra Crouwers, 2011
Maps and Composite Actions
On artificial mountains and gates to infinity
In 2006, in MuHKA, the museum for contemporary arts of Antwerp, I saw an installation by the American artist Cameron Jamie. The installation was called ‘Maps and Composite Actions 2001 – 2003’ and constisted of an artificial mountain, that blocked the entrance to the space behind it. To get into that space one had to cross the mountain by walking over a path while holding a lantern. On the other side it was pitch black. The light in the lantern – I suspect it was one of those darkroom photodeveloper lamps, safelights in short, – was very dim. Once my eyes got a little used to the darkness I could make out some easels, randomly put in the space. Rather large drawings were attached to wooden boards, leaning on the easels. These drawings were only well visible when standing close, keeping the light up. The images seemed to be somewhat disturbing; goats heads, blood spatters, ghosts, knives, rocks, skulls. It was horrible and mysterious and fascinating at the same time.

When I returned to the real world the accompanying text explained how the drawings originated through a remarkable process. Apparently Jamie had led a friend into the mountains that divide Los Angeles from the desert, and executed on several occasions and locations performances especially and only for that friend. After which he’d send the friend to (one or more) composition sketch artists, the ones that make drawings for police investigations. These drawings were produced following the friend’s descriptions of the performances and those ‘reconstructions’ were placed into the installation.
To me, this installation approximates a perfection in combining many interesting elements: a story, the background of that story, the briliant idea to close off the space with a mountain, the resulting darkness and accompanying isolation, the choice for the dim lantern the viewer had to carry which immediately emphasized the notion one just entered another reality, the simplicity of the drawings placed on easels and the strange mix between entertainment (the walk across the mountain) and ‘serious business’ (the alarming images). I just can’t seem to recall whether there were sounds or not. There probably weren’t any.
Much later I stumbled, though through a whole other path, upon a similar way of presenting my work, though I only noticed this after I’d actually made the work. For a solo exhibition I wanted to divide the space into three parts, after the archaïc structure of a narrative: start, middle, ending. To obtain this I needed something to lead the viewer from one part into the other so I built a large gate of ‘crappy’ wooden boards which was placed as a divider between the first and the second part of the space, after which it became increasingly darker. The last space – the ‘ending’ – was filled with almost ceiling-high black murals, which were vaguely lit by the orange/brownish glow of a few safelights and an animationprojection of a lunar eclipse. I realized I’d build a temple. 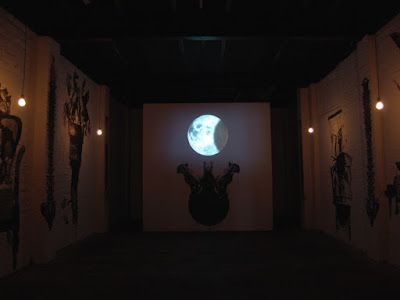 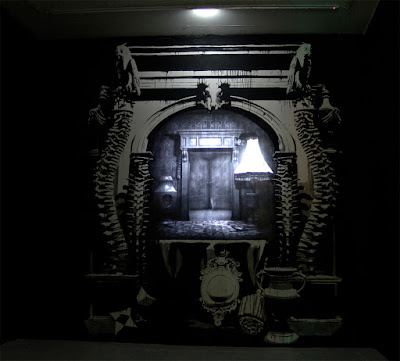