In april Werner Herzog’s new documentary: Cave of Forgotten Dreams is released in theatres. It was filmed using 3D techniques and many different cameras and lenzes. Above the trailer (which, unfortunately, seems to be accompanied by a rather esotheric soundtrack). There’s also a short interview with Herzog about filming the piece:
These caves are becoming increasingly important in my own work. I tend to regard them as the first examples of what we would now, in a contemporary art context, call ‘multi-media installations’. One can more or less safely assume sound, though not physically reflected anymore ofcourse in the caves like Chauvet, was part of the ‘cave experience’. There have been many books written, ideas generated and theories posed on what might have been the function of these caves. Since the last decade or so scolars from different fields like neurology, archaeology, psychology, geology, antropology and philosophy are trying to work together to come closer to some sort of understanding. We will never be able to reconstruct the exact symbolic meaning of a certain bison at a certain spot and a certain scale, but there are some clues that there’s a rather firm connection between the choice of caves, the placement of the drawings or reliefs inside of it, the development of ‘religion’ and the evolution of our mind (which is something else than the evolution of our brain).
Part of the phd proposal I have to finetune is connected to the notion that (controlled) spaces have been used throughout our image-making history as a physical analogy for our mind. I’ll illustrate this below, in short: 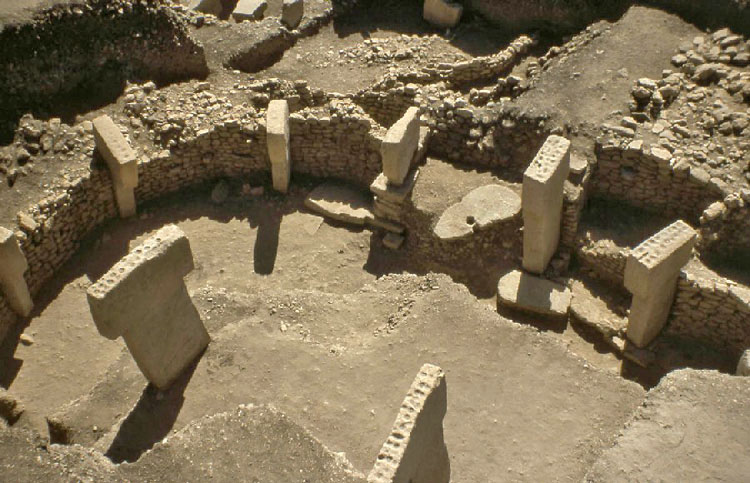 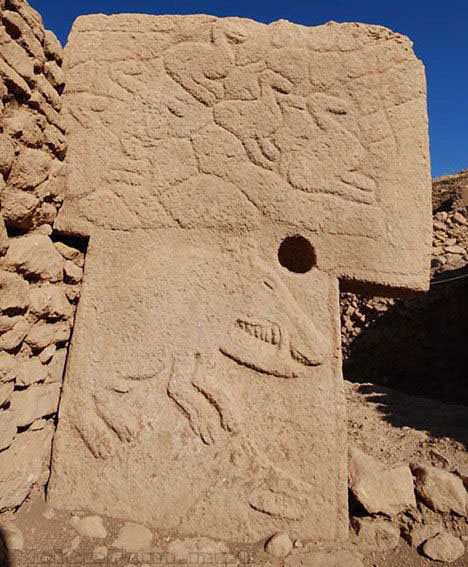 FROM ANCIENT RITUAL ARCHITECTURE TO THE PRESENT

Neolithic monuments in Europe, Hunebeds in the North of the Netherlands, some 5.000 years old:

Which were built out of rocks the glaciers of the last ice age pushed from Skandinavia to the south and were originally covered with sand, so they must have looked something like this:

In those times, especially in very flat areas grave-hills were also common:

And from the inside:

Which looks suspiciously like an artificial mountain with a cave in it.

Of course people were not aware that they were in fact (maybe) trying to build mountains, hills or caves, but there might be a distinct connection here. Below, Stonehenge (around 4.500 years old):

The conventions of ‘monument’ building more or less got rid of the idea the rocks needed to be covered. Stonehenge (and other ‘monuments’ for that matter) left that path and got so big it would’ve been technically impossible to construct a decent hill or mountain around the ‘foundations’.

And this is the The Mortuary Temple of Queen Hatshepsut, which dates back to about 3.500 years ago:

Note that though it might have been easier to construct a building on that scale against or ìn a natural elevation, indirectly this still refers to a cave, though there’s much more (decorative) emphasis on the entrance to the space.

I’ll skip a lot of other archaeological architecture for the sake of making a point here, so we’ll take a leap into time towards the Greek/Roman era.

Though the Parthenon and similar temples at first glance might not look much like it anymore, there are still cave-like elements: controlled light filtered through the columns, which can be both interpreted as an emphasis on verticality (halls in caves) or obscured view points (both in woods and caves). Again, at this time the columns were probably more of a technical choice, but a certain conceptual/religious easthetics would’ve been present.

Above is the eight-cornered chapel of Charlemagne (Karel de Grote) in Aachen, the oldest part of the Dom of Aachen, which was built starting in the year 792. Below the floor plan. I didn’t mention the significance of alcoves and recesses in the structures, but they seem to be consistent througout the history of buildings designed for religious purposes. I’ll probably go too far when I point out that the more alcoves and such a space has, the more it looks like a stylized natural cave. Hidden, or special areas/spaces within a space is also part of a controlled environment. 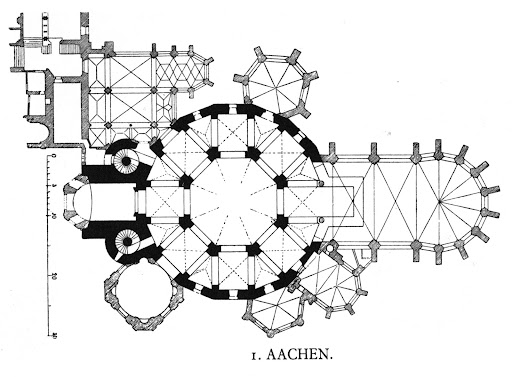 We’ll move a bit forward, to the Gothic era now. I’ll leave the architectural developments in Asia aside for now, but if you want you can google them and see great similarities in the emphasis on light (or lack of light) control, the relation between great amounts of material (rock, stone) and the volume of space inside and the need for decoration to seemingly obscure clear shapes. Like thus:

This is the Milan Cathedral. The surface from the outside looks a lot like a heap of stalagmites and the general shape reminds much of the defenition of a mountain:
“A mountain is a large landform that stretches above the surrounding land in a limited area usually in the form of a peak.” From inside, the Gothic buildings might remind us even a bit more of cave-halls then any other buildings before:

Light is ofcourse much more present, though still very controlled. Light in churches always flows above the visitor’s heads and is always diffused by colored glass so it never touches anything or anyone directly.

Alright. A lot of these ‘rules’ also apply to chapels and in some cases even to irrational elements in relatively recent living spaces:

A small catholic chapel like this one above can be found almost everywhere around Europe, not only in the countryside but also unexpectedly in the middle of a city. The fake concrete cave below (an interpretation of the Lourdes cave – a cave!) is a bit less common. This one can actually be found in the small village I used to live in as a child. There’s also the more mysterious emphasis on fireplaces that I’m interested in. They – well, not anymore in this day and age – often used to resemble small temples – one could interpret the chimney as an entrance to a cave in that respect. Or a gateway directly to the heavens. Well, maybe not. At least one can interpret them as some sort of home-shrines: 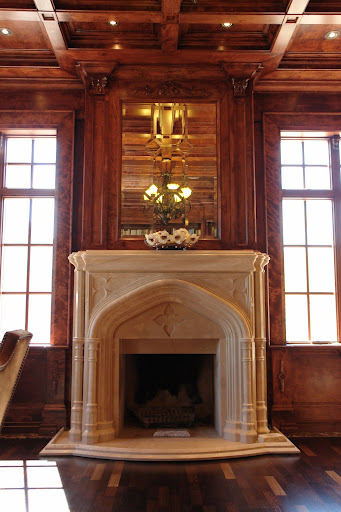 Back to the general function of religious/ritual buildings. Partly based on the books by Steven Mithen ‘Prehistory of the Mind’ and the books ‘Inside the Neolithic Mind’ and ‘The Mind in the Cave’ by David Lewis-Williams I tend to look at these constructions as portals to The Other World, whichever that world might be, depending on the specific belief-system: heaven, the realms of the gods, the place where our ancestors and dead ‘live’.

Being a rather rigid atheïst myself, I consider these ‘worlds’ as fiction. They do not exist except in our minds. This is how our brain functions: we dream, we fantasize, we more or less sleepwalk most of the time while drifting between different levels of consiousness. What contemporary art concerns: it doesn’t stray away much from the original starting point of the use of images about 35.000 years ago. Art tries to materialise what’s inside the artists mind.

This brings us to a present day interpretation of exhibition-spaces, which in this light then could be considered as portals, just like all the examples above. Due to a pile of conventions these spaces, these musea, are usually not explored in that way, though the spaces tend to be as controlled as churches and temples: diffuse light, often from above, relatively large volumes of space that produce echoes so that the viewer feels compelled to whisper, an emphasis on height. Unfortunately the neutral ‘white cube’ doesn’t always help the viewer to actually loose him/herself in the world of the works. Quite the opposite, actually. The ‘neutral’ space dominates and the distance between the viewer and the work is extended. The visitor is often very aware of his own presence, because he stands out in the usually overlit and echoing spaces. 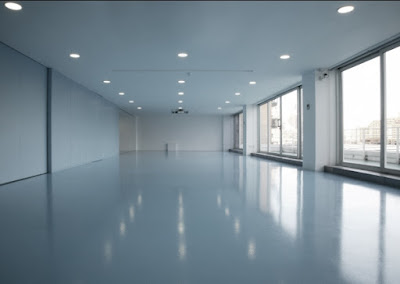 I think exhibition spaces should be rearranged to connect with the works more. One possibility, that’s sometimes used, is to mostly use concrete walls, that don’t reflect the light so much and are in fact much more natural than bright white walls. In my opinion the former exhibition space of Extra City (in Antwerp) was perfect. The building has unfortunately been demolished. 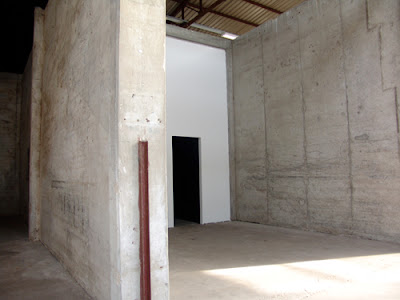 Also Palais de Tokyo in Paris has parts with concrete walls, as does Tate Modern in Londen. Another option would be to never repaint the walls again, like gallerist Annette de Keyser does with her gallery space in Antwerp. The walls of her space have all the traces of retouching after holes were made and therefore the walls are covered in shades of whites and greys. 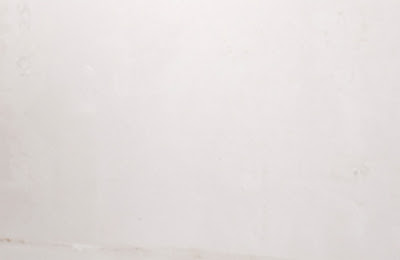 Also more attention should be paid to lighting an exhibition – light, or lack of it, influences the viewers sense of disconnection to prozaic ‘real’ life. Another point of attention can be an extensive use of some sort of ‘narrative’ as a guideline through the spaces. Unfortunately ‘narrative’ is not in fashion within the context of contemporary art. Combining artworks to make them work together as a meta-installation as opposed to showing works seperately, with a lot of white space between them like the conventions dictate, would also help the viewer to loose himself in the works. In other cases fog-machines could assist to isolate the viewer from the surroundings: the viewer has to come close to the work and becomes invisible for other visitors – also the other works in that particular space ànd the space itself become invisible.

In short: all ‘tricks’, that are as old as the start of our visual evolution, should be re-investigated to go back to a portal-experience of a space. One should consider the space as a carrier, instead of a seperate entity that surrounds art works. Caves as multi-media installations, the exhibition space as a portal to the mind.