There’s a love/hate relationship going on between me and my left hand, or to be more specific, the style of drawing that flows out of that hand. I don’t particular like my own way of drawing, it’s too comic-book-like, due to the clean lines. This is why I actually didn’t draw for over ten years.

When I started drawing again I my style hadn’t changed much but my attitude towards it did. I decided to accept that this is the way I’m drawing and I might as well make the most out of it. Nevertheless, everytime someone told me I should draw comics it somehow felt like an insult.

I do not have anything against comics, that’s not it. I’m just rather indifferent towards them. There’s one exception: Storm. 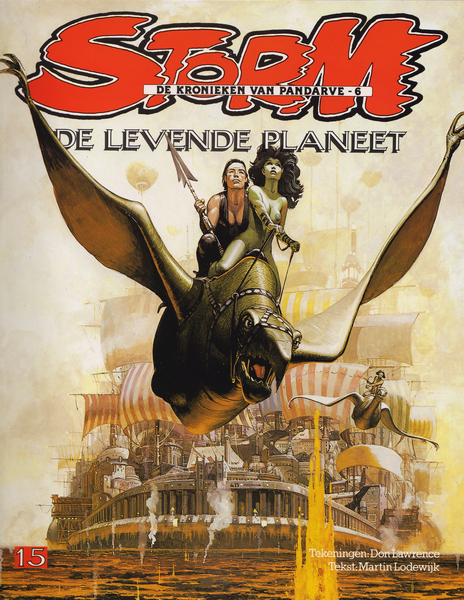 The image above is from ‘The Living Planet’, episode number 6 from the Storm subseries ‘The Chronicles of Pandarve’ but number 15 from the whole original Storm series, written by Martin Lodewijk and drawn by the late & awesome Don Lawrence (his death was even mentioned on the Dutch 8 o’clock news!). I knew none of this when I first accidentally glanced into a Storm comic – this specific issue, actually – in the waiting room of the orthodontist, somewhere halfway the nineteen-eighties. There was lava, some sort of giant fire-worm, nasty characters, flames and smoke. I only knew Asterix, Suske & Wiske and Kuifje at the time. This looked nothing like that and it scared the hell out of me.  But ever since then Storm made my visits to the mangling orthodontist much more pleasant. It wasn’t until years and years later I started to seriously collect Storm and this particular comic became an undeniable influence on my work.

The best episode in my opinion is ‘The Twisted World’: 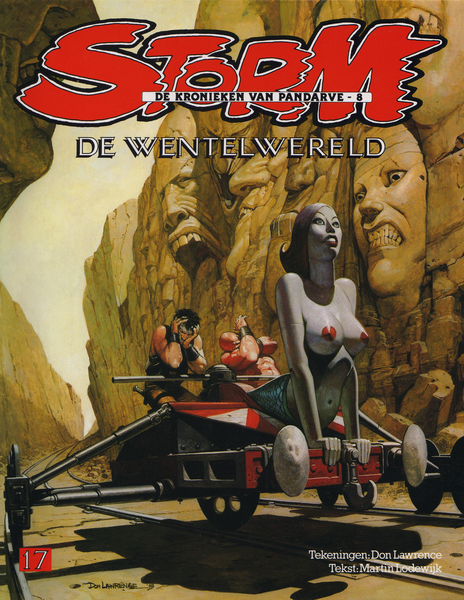 Maybe it’s the consistent lack of gravity in the ‘Chronicles of Pandarve’ series why I like Storm so much, or Lawrence’s use of light and colour, I don’t know. It’s not the character of Storm, since he more or less lacks a personality and is way too muscular for my taste. It’s also definately not Amber/Redhead’s accumulating nakedness (she seems to wear less and less clothes each issue, until none at all in the last few Storms) though some of her outfits – if any – are kind of cool. It’s also not Nomad. He’s just too red. He’s the only one with good jokes, though. After Don Lawrence died new Storms were produced, but they need two people to make similar drawings and still they’re not half as good as Lawrence’s drawings were. I’m really not sure if it’s such a good idea to continue Storm this way.

There’s one other comic I absolutely love, though I don’t have it myself (yet, it should be in reprint by now, I hope): MULTIFORCE by the American comic book artist Mat Brinkman.

Anyway, when Jess de Gruyter (member of the poetry show project Boest) asked me a year ago to draw a seven pages comic as an opening for his next (third) poetry edition, I said yes, just to try it. I underestimated it ofcourse. The drawing in itself was not that complicated, but putting the whole thing together was sometimes kind of a hassle. The story was written by Jess, I made the drawings based on his storyboard. This comic doesn’t have any textballoons, it’s a bit more cinematic, with text above the pictures like it was a voice-over. The poetry book & comic will be published this spring, by Poëziecentrum in Gent. Below is the third page:

So this was the first comic I ever made.  When I went to an artist in residency, the wonderful RAID Projects, in Los Angeles in the summer of 2009, I accidentally started to draw some sort of comic book about things that happened to me over there, like getting stuck with my steaming $400 car at the Hollywood Sign, getting chased away by the voice-boxed security guy of Steven Spielberg and getting a business-card of some schmuck ‘filmdirector’ who just wanted to tell me how sexy I was. That kind of stuff.

I wasn’t – and still am – not completely sure what to do with these series of drawings. Some parts are funny, but as a drawn story it’s maybe a bit too loose. Maybe I should redraw the whole thing when I’m up to it. Which is probably never, because I tend to never do anything twice. I mean, I almost never make sketches, for instance – something has to work the first time, otherwise I’m already three steps ahead of myself and loosing interest in the subject I was working on. One could call it a constant state of flux, maybe. Or just mad impatience. It can also be turned around in considering half-finished ideas as part of a process. Which suddenly can be regarded as a good thing.

Anyway, since in the mean time this whole comic book idea got stuck in my – and in Jess’ head – we both decided to give it a go. To put together a serious comic book, that is. We started out with some vague ideas (it should be about us, for instance) and based on some quick doodles I started with the intro of our book. Like so:

Above it sais: T = 0
Which means: time is zero, the starting point of the inflatable universe we’re living in. Then it proceeds with the rest of the history in a spectacular nutshell: