The image above is page 5 & 6 of the comic book Jess de Gruyter (left) and I (right) are making. We function as the main characters in this semi-autobiographical book. Because it’s not finished yet, I can’t really put high quality images on the internet. Also, the project still lacks a good title. We’re now already in the process of finding a publisher, but apparently due to financial and maybe even cultural crises this might be difficult – being debut-comic artists.

Next up:
I’ve started to seriously pursue a doctorate in fine arts. There are many, many objections against considering art as a scientific project and although I still feel extremely dualistic about the whole concept, I want to do this anyway. I have an outlay for the research proposal for which I’m trying to find a suitable promotor at an university. The proposal concentrates for now on several fields which are closely related to the direction my work has been going to the last few years:
* evolutionary biology, or the origin of art/ficion within human cultural evolution
* visual archetypes (symbols, but not the ones that have translated itselves into alphabeths necessarily, but the ones that are based on myths and stories – for instance; the link is just a well known example in certain subcultures, by the way. The other day I had to symbolize the number ‘three’ by hand, usually expressed by folding the thumb and little finger together, therefore showing the three other fingers but accidentally the linked hand-symbol – but with extended thumb – came up first as some sort of impulse – insert smiley or something like that here)
* the status and function of the prehistoric artist in prehistorical society through now
* the significance of art being used as a carrier for (fictional) stories, including religions, myths and belief-systems – the need to build temples and cathedrals the way they were built, for instance – and the way their visual origin could be and is being used in contemporary art installations to trigger or enhance a certain impact (and why does the audience comply to those parameters)
* the (re)interpretation of prehistoric art and artifacts by contemporary artists versus the interpretation of those artifacts by theoretical academics (who often have no practicle experience in drawing or sculpting)
* an investigation on the importance of the ability to draw as part of human cultural evolution

Also:
the 30th of october the exhibition James Ensor/Hareng Saur: Ensor and Contemporary Art opens at the S.M.A.K. museum in Ghent, where I’ll present an installation and a drawing. The installation is a slightly modified version of the installation I did last spring in SecondRoom in Antwerp. See an earlier post for images. The installation was chosen for the affinity it has with the works of Ensor in which he uses interiors to produce a both intimate but also almost eerie claustrophobical space. Below, two images of his own living room. 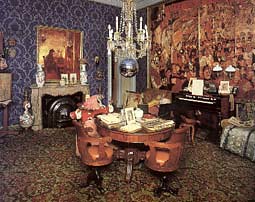 And:
In october the first book I compiled of what hopefully will become a series of small, handmade books in a limited edition will be presented, which will be called “The Cover Mountain” after a work by Ghent-based artist Kelly Schacht. Here‘s a link to the blog with a list of participants and links to their sites and works. This first book will be presented at the Demian Bookstore in Antwerp. A great place for book-drooling.