Like I mentioned earlier some people who made photos on hip parties in Antwerp organised some sort of exhibition in this club Kissinger in Antwerp a couple of weeks ago. They’re called ‘Ikonoklast’ and the exhibition was named ‘Ego’.

The ‘assignment’ for the contributors was to produce a work based on a series of photos made by Ikonoklast on a – well, I suppose it was meant to be a party. Below is the first photo from the series, which was for obvious reasons the picture most people, including me, used as a starting point for a work. 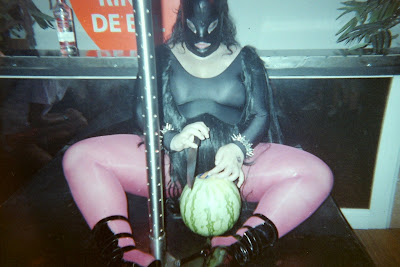 In between things I made a drawing, a short story if you will. It’s titled ‘wijsneus’, which is translated in English ‘wiseacre’.

If you click on the image below you can view the drawing big enough to read the text (to zoom in, click again on the drawing when it opens in a new window): 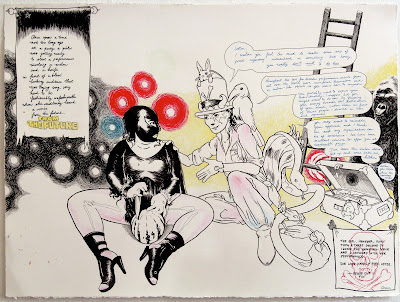 Well, I do admit the drawing doesn’t mean much. Since it won’t be part of my regular portfolio and has a very real chance to end up in a drawer this blog is probably the only place it can be seen ever again.

There’s a possibility it will be published in Vice Magazine, or on their blog in december, though.

This reminds me of one of the first attempts I made to draw something like a story-line. While I was an artist-in-residence at RAID Projects in Los Angeles three months in the summer of 2009, I made a diary in drawings. Only some of the drawings – which were not particularly related to the story – are on my website and were shown during a duo-exhibition at LhGWR in The Hague in the winter of 2009 – 2010. The rest, the ‘comic’ part, just never got out. I tried to design the story a bit, but since I was making every drawing on a seperate piece of paper, it turned out to be quite difficult to make something decent-looking.

The ‘story’ is based on actual events linked to this, this and this blogpost from a now ‘dead’ blog I set up especially for the time of the residency, mostly to prevent me from having to send the same mails to everyone back home.

It would be a shame to just totally forget about the whole thing, so, if you’re interested, you can download a crudely (well, almost not at all) designed version in pdf. by clicking HERE. It’s 11 mb, in quite a low quality but viewable on screen. If anyone feels compelled to design the whole thing into a real booklet for free, as a hobby so to speak, just let me know. 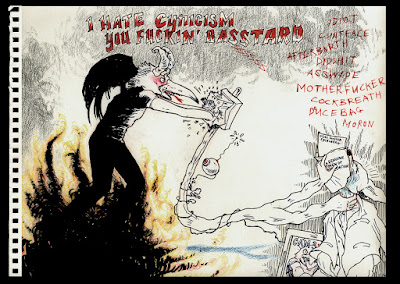