some 2.694 kilometers away, percussionist/musical improvisor/shaman/pelgrim/troubadour Eric Thielemans is on a true Odyssey across Europe. At this moment he’s in Istanbul. He left Antwerp in his van about two weeks ago, his drumkit in the back, to see in person what the state of underground musicians in Europe is in at the moment and to investigate ‘contemporary troubadourism, exotism and the Other’. On this trip Eric is meeting and playing music with all kinds of people and arranging in promptu performances (100 of them in the time that he planned to be on the road, which is about a month, I think). He visited a monastary in Italy and Athens, before driving to Istanbul. He’ll be in Vienna by the 7th of october.

You can read his increasingly feverish, but very real report on his personal blog here. 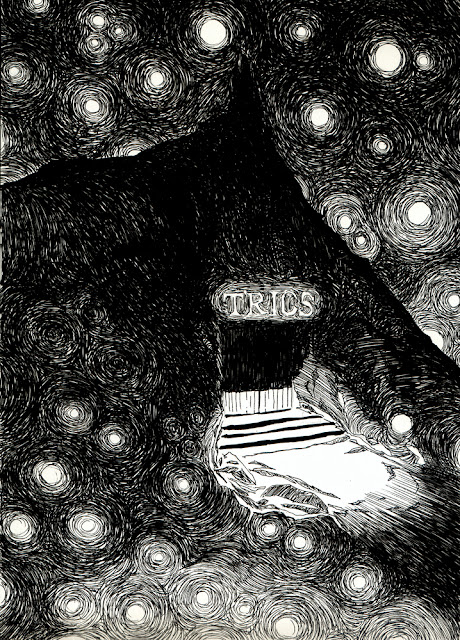 One of the many projects Eric has undertaken consists of a performance named ‘A Snare is a Bell’, in which he uses a continuous drum roll and, in a subtle way, his voice but no amplifiers or other sound equipment to bring about some sort of collective state of hypnosis amongst the audience. The performance causes some sort of auditive hallucination, which in my case resulted in an African chant of a group of voices. Some people hear harps, organs or harmonicas. Here’s a video, which doesn’t do the performance justice but if you’re interested, the l.p. (recorded in a church with over ten microphones, I’m sorry I forgot the exact amount) might still available for ordering on the Ultra Eczema recordlabel , release #UE49.

On a different note, another hero, but this one is in Drawing, has an exhibition until the 9th of october in LhGWR in The Hague. Martijn F. Overweel is mostly working as an illustrator for magazines and newspapers, but his great style and the careless inventiveness of the added texts make sure that a number of works can stand by themselves. Like the example below: