Below two overviews of the installation I finally made in room #103 of Hotel Bloom! in Brussels as part of the Trajector Art Fair. Which was in fact a really weird happening if you ask me. The installation consitst out of a lamp with a 7watt bulb in it, two bamboo sticks (very important!), black rope, a drawing of 1m50 x apprx. 2m20 and a videoprojection of an animationloop with the soundtrack by Tim Vanhamel. We put grey carpeting over the ugly green carpet and hung black curtains over the green curtains, so the space got more neutral. The construction the installation is build around is usually the part the head end of the bed is resting on but now functions as a shrine. The bamboo sticks conceil the, in this case useless lampposts. I tried to film a bit, but it was too dark for my camera.

Also the mirror on the far left worked well, by the way. The animation is a slow cameramovement through a 3D forest, that’s made of a silver pinetree and a golden deciduous tree, but together they sometimes look more like a jungle. The first half the camera moves forewards, moving in from a black fog. Then the image is mirrored and the camera starts moving backwards until it moves out of the woods and the image disappears into this black fog again. The soundtrack seems to come out of this forest.

Above a view of my three prints (the ‘Shrines, I, II & III) at the Base-Alpha gallery booth on Art Brussels.

I suspect I’m in the business of building Shrines & Temples. This is what art was used for during most of human history. It’s task was to visualize and re-enforce the meaning and super-human/supernatural state of philosophical, fictitious and actual components that believe systems are made of. 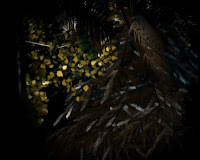 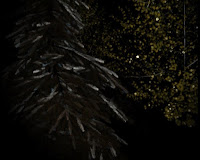 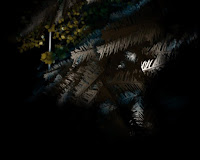