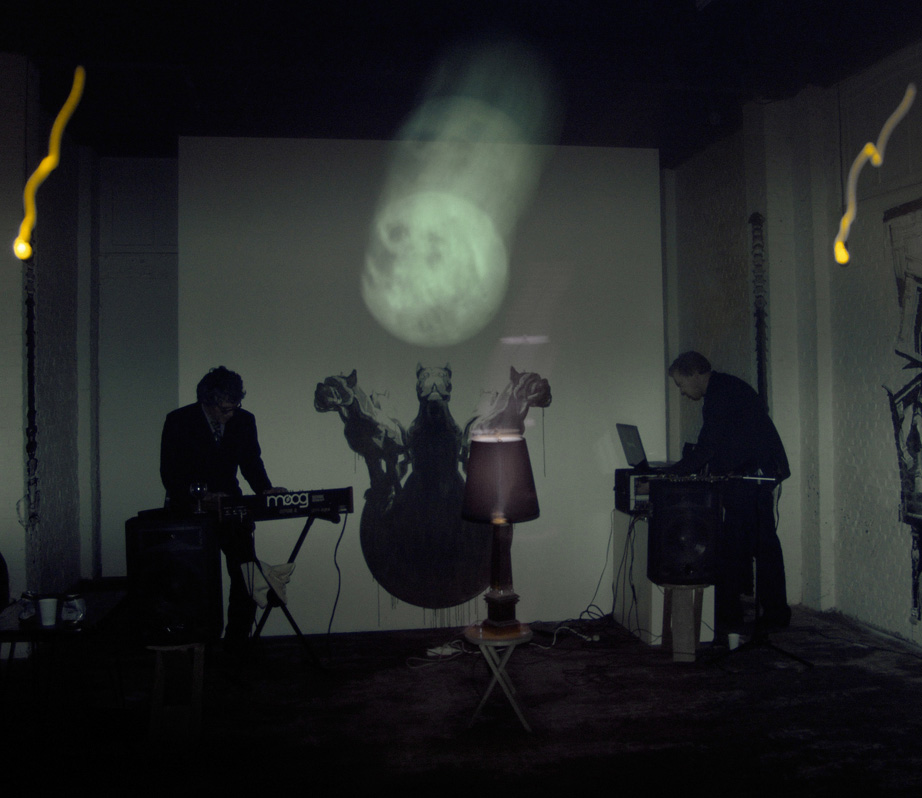 On the lovely evening of the 6th of february all these artists performed live in my exhibition at the Base-Alpha gallery:
W. Ravenveer
F.L.U.T. (Harry Heirmans & Rufus Mich)
Teun de Lange and Miguel Horatio Sosa
Butsenzeller versus Max Rouen
Mauro Pawlowski and Eric Thielemans with a virtual Antoine Boute 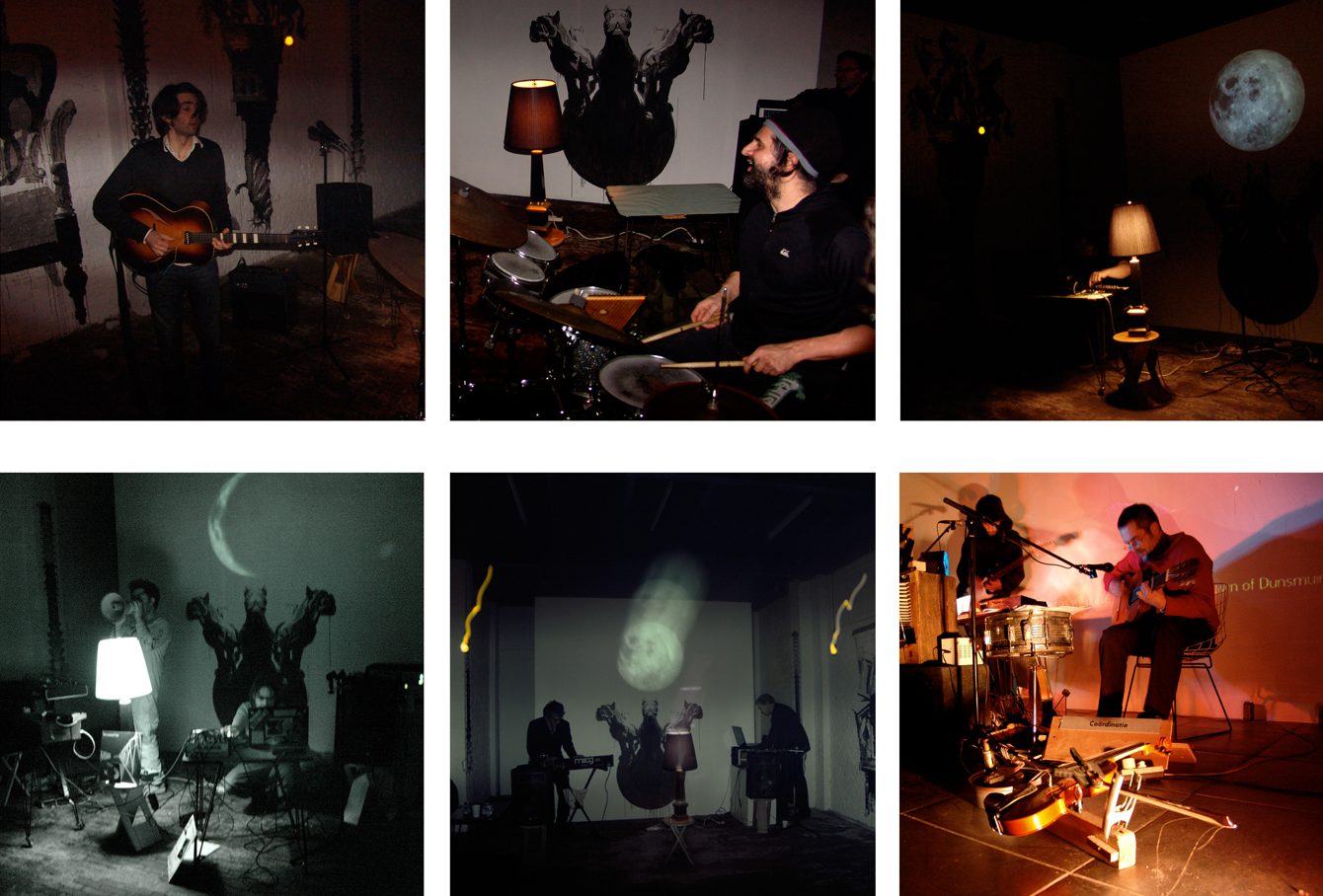 I’ve never really understood the effort some people or institutes for that matter have to make to get something done. It’s mostly about asking excellent people for the right environment, writing some emails, making some phonecalls and picking up or dropping off some equipment. The nice thing about excellent people is that they are usually very self-sufficient. Also excellent people tend to do excellent things most of the time, so an evening with folks like that can’t go wrong anyway.

The most stress-inducing thing of organizing the performance-night at the gallery was me having to play bass for the first time in ten years. The duo F.L.U.T. makes a habit of having the invitor, so to speak, participate in one or two compositions. In this case we produced some sort of song in a one-afternoon rehearsal after which one of my essential bass playing fingers got damaged due to the lack of practice combined with the sliding bassline I unfortunately came up with.

The other stress-inducing thing is trying to get the technical stuff right. When asking excellent people, there’s always someone who’s an expert in those things and willing to help. This event was absolutely and fantastically made possible by Teun de Lange’s efforts. He brought the neccessary equipment and helped transferring Antoine Boute from the computer to the sound equipment. The only setback was my laptop being difficult. Antoine is in Montréal at the moment, so he performed throught Skype. There’s only a wireless internet connection in the gallery and the laptop couldn’t be placed in the back space because the metal in this part of the building blocks the signal. The laptop had to be placed relatively far from the ‘stage’, and the idea was to project Antoine with a videoprojector on the wall, while he was doing his thing. I had the whole thing set up when my laptop more or less died, well the airport connection did. It does that sometimes. It’s an old laptop, it can’t help it. It’ll be fine this day and completely confused the other. We had to use the pc laptop of Bart Vanderbiesen, the gallerist, but with this one it was apparently impossible to connect it to the beamer. But hey, we had sound and that was great enough (though we had to work through a mysterious ‘earth-loop’, which caused a nauseating zoom during the sound check). For the rest it was a breeze.

Anyway, first up was W. Ravenveer, also known as Erwin van Looveren. He brought a – er – box and some synthlike thing and used the soundfile with Ashley’s spoken text of the Dunsmuir animation. A great start:

After this it was F.L.U.T.’s turn, with a nervewrecked me playing along with the last two songs. Right after this performance I felt like a weight had been lifted off of my shoulders. Our rehearsals were better, but well. I’m not in this photo, ‘cause I took it.

Right below is the video Herman, Harry’s significant other, shot. I’ll be at the end of the video, making many, many mistakes. Luckily the project is called F.L.U.T., which means something like ‘it’s nothing much anyway’. This helps not to raise expectations – which is good when playing with a chick that built up a serious lack of bass playing skills.

Then Miguel Sosa en Teun de Lange played. Their compositions were quite subtile so it was a bit annoying the audience was talking through it. Unfortunately there’s no video of them performing. At the start there was a gps with the co-ordinates of the gallery on stage. Also there were apparently some really interesting people from Iceland in the audience. One of them has something to do with open-source programming, he’s really big in that field, but I don’t know anything about it. They seemed very interested in F.L.U.T.’s low-fi equipment. I suppose there were all these really complex computer technicalities going on with Teun and Miguel’s performance. I still have to ask Teun what exactly was going on. Though he was also ‘oldfashionately’ playing the clarinet.

Max Rouen (Niels Borrey) and Butsenzeller (Geert ‘Bootsie’ Budts) decided to do something together a week earlier and rehearsed for an afternoon. They were an exciting and and insanely loud team. They chased the major part of the audience away, to the front part of the gallery. There was undeniably chemistry between Boots and Max. In another life they would have been brothers. I do hope they’re going to work together more often. They did a cover of ‘Crimson and Clover‘, which was beautiful (sung through a megaphone), but wasn’t recorded on video. I mistook that song for a Velvet Underground song, but now I know better. Boots had to spin records after the performance at a club in Antwerp. Boots and Max used fragments of the soundfile of Ashley’s voice. As an extra feature I heard Boots shout: ‘California über Alles’ over the megaphone. Which was funny.

Last up, but not least, were Mauro Pawlowski, Antoine Boute and Eric Thielemans. Mauro and Eric decided to play together that afternoon or so, but they’ve performed as a duo before. I remember an absolutely awesome improvisation of them both on the rooftop of the MuHKA, the Museum of Contemporary Art in Antwerp, about one-and-a-half year ago. A friend of mine described it something like ‘chaos collapsing into order’. Which was very true. Anyway, the whole shedule ran a bit late and in the mean time Antoine was already standing by through Skype for over an hour but since he was six hours ‘behind’ (it was late afternoon in Montréal) he didn’t seem to mind. I hope.

It was rather funny to hear a very short conversation between Mauro on a mike that was connected to the laptop, so Antoine could hear him, but this mike was not connected to the PA so the audience couldn’t really hear what he said – and Antoine, who’s replies were amplified loud and clear through the speakers. Technical stuff. I love that.

Antoine couldn’t completely make out what the whole performance sounded like, so he just did his thing and he did it well. A part of the audience didn’t realize his voice was live, over the internet, but that didn’t matter.

After this we all went to Plaza Real for a drink to the fabulous Nick Andrew’s birthday.

Fragments of the evening were filmed by Chris Gillis. Thanks also to Bart Vanderbiesen and Geoffrey de Beer and to all the people that showed up. On to the next project!