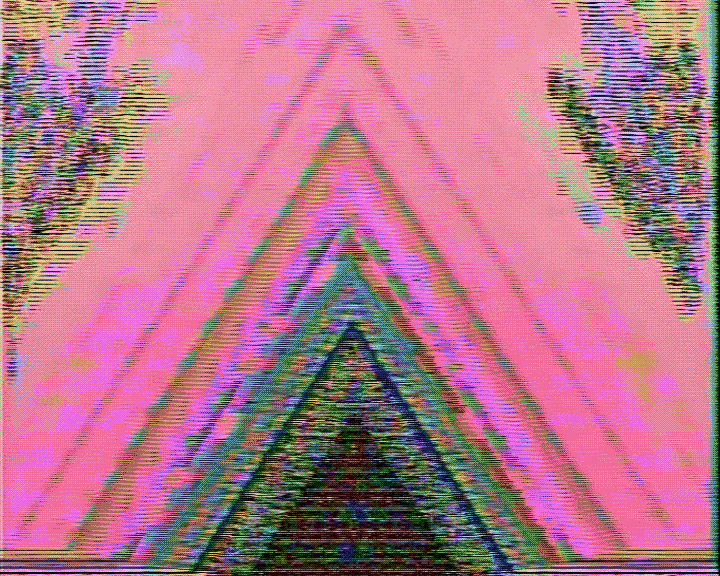 In a fairly recent development, digital art can be traded and collected in editions through NFTs (*). Starting from her own digital artistic practice, Alexandra Crouwers is building up a collection of works both by established artists and anonymous creators. She highlights a new piece from that collection every month in this column.

Jeffrey Sconce connects technology and the exploration of supernatural phenomena in his book Haunted Media. Electronic Presence from Telegraphy to Television (Duke University Press, 2000). Invisible forces of nature, such as static electricity or the disembodied voices travelling through the ether by means of radio-waves, are made detectable through equipment acting as mediums.

The portalesque qualities of machines and technology is a returning theme in the arts. The most well-known (and frightening) examples are probably the videotapes in Cronenberg’s Videodrome and Suzuki’s Ring. Director David Lynch uses audio- and video-glitches to signal the presence of another dimension. In the magnificent Twin Peaks: The Return, buzzing electric currents string the episodes together, suggesting each wall outlet as a possible means of transportation. In the Death Grips’ music video Guillotine (2011), the distorted music runs in tandem with glitched visuals.

Ever since The Matrix came out in 1999, the phrase ’There’s a glitch in the Matrix‘ has become commonplace. A ‘glitch’ is in fact a mistake, an accidental deformation. Where technology tries to achieve some sort of numerical perfection, the glitch sardonically screws the signal between the source and the output.

Everyone who has ever watched digital video knows the phenomenon: streaming disruptions inadvertently produce grotesque disfigurements and colourful disturbances. A bit further back in time, we have the static from worn VHS tapes, or the fuzzy ghosts of badly tuned tv stations. Lens flares – the light leak artefacts produced by aiming a lens directly into the sun – can be considered protoglitches.

In the technological arts, glitch art has become an important – and growing – subgenre, with Nam June Paik as its godfather. Superficially, glitch art is easily recognised by its rainbow-coloured statics – a characteristic of messing up the signals of analogue equipment – and loops, ultra-short scenes repeated ad infinitum.

It’s a remarkably ideological genre: glitch manifests itself by using equipment in ways it was never meant to be used. Software developers often have (glitch) artists test a new programme or feature by having them find ways to ‘break’ it. Glitching visuals are a metaphor for the perceived order in the world; the glitch leaves scratches in society’s glossy varnish.

This consciously celebrating of errors, and the purposely bending of conventions are central concepts in the psychedelic bodies of works of artists such as Sarah Zucker and Sky Goodman. The work highlighted in this column, Open Life, by Latvian artist and VJ Ina Vare is an analogue glitch portal in true form. As part of four other works (Open Portal, Open Soul, Open Gate, Open Space), it adds to an almost mystical quintet. And just like that, an accumulation of mechanical inflexions transforms into a visual meditation.